4 Obvious Signs A Taurus Man Is Not Interested In You

You’re having an eye on a Taurus man, right?

The problem is: this guy is really confusing because you hardly tell whether he is playing hard to get or simply has no feelings for you. The reason is because he doesn’t express his feelings openly.

If you feel like he is acting distant and giving you the cold shoulder, then this article is definitely for you.

Here, signs a Taurus man is not interested listed below will help you figure out his behavior and attitude when not into somebody else.

How to Tell If Taurus Man Does Not Like You? 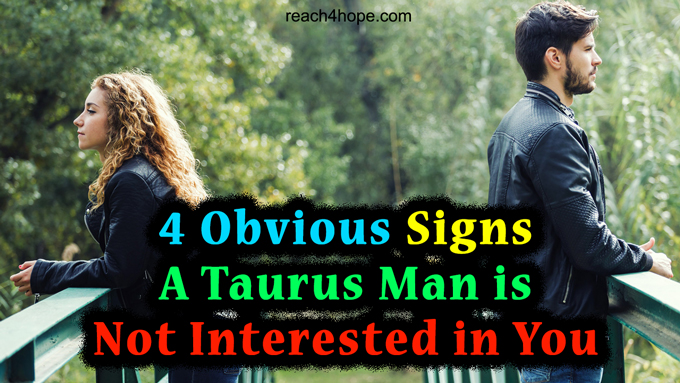 Sounds cold, but this is how a Taurus man behaves if he has no special feeling for someone.

When this person is not into you, he will pay no attention to your attendance, even more harsh than when a Capricorn man is not interested. Literally, he may walk by and not even notice that you’re sitting there. That’s how he is!

Some often wonder if he did that on purpose; however, the answer is that he intentionally ignores your existence most of the time. The only matter in this case is that you must know the difference of when he is upset or when he doesn’t want to see you.

If you are, as a Taurus, is into a Capricorn, then have a look at this sign in a romantic relationship for in-depth understanding.

2. He has no mystery

Actually the Taurus male is not the mysterious kind.

He is usually described as the open book or truth teller who will be honest and always tell the truths even when it can be brutal to hear. To those whom he’s not interested in, the Bull is blunt and razor sharp.

Well, it doesn’t mean your Taurus crush wants to be mean; indeed, he can’t just be silent and gives you false hope. Though what he says or acts seem uncomfortable and a bit harsh, but it’s something that needed to be direct.

In addition, Taurus man will not spend his time to learn about the person he doesn’t get attracted to for whatever reason. Hard to love, he has no problem of excluding people from his life.

Learn how to attract Taurus man via texting!

3. He lets you know through his body language

Actions are louder than words!

If you still aren’t certain about the Taurus male in love feelings, then it’s better to watch his body language. The way he acts itself will surely speak loudly and give you accurate meaning about his intention.

For instance, you can tell that he doesn’t like you if he avoids making eye contact and frequently shows you his backside. Also, he will stay away from anywhere that you show up or may act awkward when around you. When you have a talk with this guy, try observing his gestures – crossing arms and not looking at you during the conversation mean he wants to get out of the situation instantly.

When he’s into someone, he will be more warm and generous.

This guy will never show his gentle manner to those he isn’t drawn into.

Most Taurus men are very focused on life goals or whatever they desire. Thus, if he has his eyes on someone, he will quickly come up with a plan for the chase. On the other hand, he won’t be wasteful with his time to what or who he isn’t into.

He basically just moves on to the thing or person he is not interested in.

Even if he finds you attractive, he won’t make a move if he feels you can’t create a good match together with him. This guy has capacity of withdrawing himself from his surroundings. When you’re around, he’s good at hearing as well as seeing selectively.

Sometimes he is a bit more elusive like Scorpio.

The truth is that Taurus man cannot hide his feelings. It’s easy to know when he gets mad, but the difficulty is that you’ll never tell the reason for his rage until he opens up about that matter.

In some cases he won’t even mention about that.

Keep in mind that the Taurus guy can break your heart with his behavior and word because he is the harsh being to those who he has no feelings.

If you have any question related to signs a Taurus man is not interested, leave your comment below.