10 Real Signs Taurus Man In Love With You (Discover NOW)

What is Taurus man looking for in a woman?

This guy is most likely to fall in love with the female who is feminine, independent, and loyal. Just behave true to yourself and you can capture his heart naturally. He also prefers women who are determined and strive for things she wants.

It’s not easy for a Taurus man saying he loves you because he doesn’t settle for less. He will not be captivated to those lacking sophistication and elegance no matter how feminine you are.

As a consistent man, he expects his ideal partner to be consistent in everything like he is. If you want the bull to stay forever, then be honest and loyal to him – he will never forgive for whoever lies to him.

Find out Taurus best love match with a click!

In this article, let’s find out signs Taurus man in love with you.

When a Taurus Male is Falling for You… 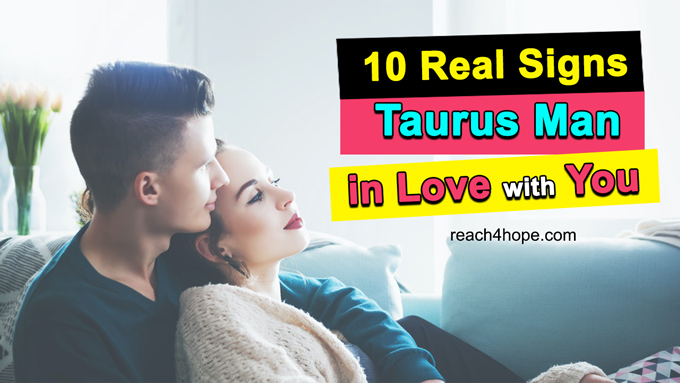 #1: He is more confident

A Taurus man in love will have a slight change in his behavior; luckily, it’s a good change. Observe him and you’ll see that he becomes more confident and certain with his decisions.

Characteristically, he’s afraid of changes and inconsistency; however, he dares to take risk the moment he meets his true mate.

He usually falls for the woman who can bring positive influence to his life, and this sign is quite obvious to see. Quite subtle at first, but his confident manner and behavior will be much clearer once he admits his feelings.

#2: He spends more time with you

The amount of time he spends with you can help you answer whether or not Taurus man is into you. Once he’s in love, he can’t ignore that fact he wants to be around his loved one all the time. However, this gives him no chance to miss you – check the tips here if you want your Taurus man think about you all the time.

This guy craves for the embrace of your love every second of a day.

For women who are wondering if your Taurus male friend is having a crush on you, this may be a sign you should keep an eye out for. He will grab any chance to ask you for dates or hang out together as much as possible.

A Taurus man who isn’t interested will never want to spend more time with you unless he is developing feelings towards you.

How a Taurus man expresses his love?

Taking love very serious, he makes an effort to build and keep the relationship with his desired woman lasting forever. The moment he finds the right person of his life, he will show her his appreciation and put his mind into the idea of nurturing the connection between him and his beloved.

At the state of falling in love, this guy will no longer care about changes in his behavior or him stepping out his comfort zone. His primary goal is to try his best for the woman he loves!

Another sign telling a Taurus man loves you is that he opens up about his feelings and allows you to enter his circle.

We all know that the Taurus male is extremely faithful and loyal; therefore, he tends to keep his family and friends close to him and spare his private space to them only. Not anyone can be invited to his circle, remember!

This is how he protects himself from being hurt!

Don’t push or force him to introduce you to his friends or family because that needs a progress. He’s slow in love but the outcome is worth waiting, so be patient.

#5: He displays his romantic side

Among all zodiac signs, Taurus is infamous for being a romantic in love.

Your Taurus may be quiet, but he has his unique ways to show his emotions and love for you. The more romantic he is, the more he loves you. Pay attention to all of his sweet, caring gestures as well as affections he brings on the table.

It’s a must NOT to take his romantic side for granted; instead, you should appreciate it and tell yourself this is how he expresses his deep feelings for you.

Get tips on making a Taurus man love you through texting.

#6: He gets jealous easily

When it comes to a Taurus man in love, his jealousy is on display.

Due to Taurus male personality traits, he is a bit shy or standoffish at the first glance. You find it hard to spot his interest in you because he won’t take the initial approach; nonetheless, he will show his true color once seeing you talking to another guy.

This guy falling in love tends to get jealous easily.

He can’t help but wanting to let others know that you’re his even if you’re still single. At the moment he’s clear about his feelings, he will confidently start his chase and make sure you are his before letting anyone steal you away.

Not overbearing or abrasive, yet the sudden appearance of his masculinity and his jealousy will reveal his love for you.

Learn about Taurus man ignoring me with full in-depth advice!

Here comes an easy-to-see love sign from the male Taurian: he shows his feelings through his touch.

How much does this guy touch you?

His touch is gentle and consistent making you feel secure. This kind of behavior is at first not as clear as you thought it would be; however, you will soon realize his touch is more intimate because he sees you more than just a friend.

When a Taurus touches you or someone he loves, it’s soft, reassuring, and gentle – this is his special way to communicate with you, and it does speak louder and more powerful than words.

One of good signs Taurus man is in love with you is that he’s supportive in everything you do.

The most essential thing he expects from his future partner is to be supported no matter what; hence, he needs someone loyal and supportive to be by his side. Specifically, the Taurus male often gets drawn to Cancer and Virgo woman because they can give him limitless encouragement – this explains why those relationships last long.

Be supportive to him and he will shower you with all the care and concern. You will become the priority of his support in anything you are involved in including your emotion, mentality, or else.

In case you’re a friend with a Taurus male and wondering if you two more than just friends, this sign is worth considering. As a friend, he usually sticks to his boundary set in the beginning, which means he can be supportive but not as much as you expect from a spouse. The thing is: there will be a difference in his behavior once he sees you more than a friend.

With the bull as the symbol of his sign, Taurus man does show his bull-like behavior in many ways. In the romantic relationship aspect, he is prone to act protective of you or the person he finds himself in love with.

Does your Taurian behave too protective towards you or treat you specially?

The harder he falls for you, the stronger his protective nature becomes. In case he’s protective of you in the first meetings, chances likely are he already falling in love with you. Therefore, don’t be afraid to notice his overly caring behavior and pick this sign up early on.

Despite his early sign of protection, you’re still advised to show your patience before he comes up with any initiative move.

If a Taurus man frequently shows up with chocolates, flowers, or other little gifts, then it’s a sign telling he is thinking about you.

This guy in love has only you in his mind; thus, he can’t help but seeking different ways to make her feel loved, cared, and special. This is when his romantic side is brought on the surface, and it will be beyond your expectation as he falls deeper for you.

Don’t quickly judge him or think that his behavior is just to cover up his mistake; otherwise, he will surely get hurt. Indeed, giving you gifts is how a Taurus expresses his feelings – the more he loves you, the more thoughts he puts into the gift.

Now you already know signs Taurus man in love with you!

Most importantly, keep in mind that your Taurus is a laid back and slow paced person, so he tends to take things slow in any aspect. Don’t expect him to approach you initially because he is not a risk taker.

If you think he’s falling for you, then you must let him know you’re also interested; in addition, you have to be the one making the very first move.

He rushes into nothing, remember!