Capricorn Man In Relationships (10 Things Of Loving Him)

Home » Astrology » Capricorn Man In Relationships (10 Things Of Loving Him)

Represented by the Sea Goat, Capricorn is an earth zodiac sign claimed to have a tough exterior.

Don’t be fool by that accusation!

Not just about smart and charming, a Capricorn man radiates a special aura making you feel irresistible when being around him. In a romantic relationship, he is the type of partner that will stay with you through thick and thin.

Reading him is never easy due to his complicated mind; thus, maybe you need a glance at Capricorn man in love signs to stop yourself from being confused about whether or not he is into you.

Though he does have weaknesses, he won’t let those define the real him.

If you want us to shed light on Capricorn man in relationships, keep track of all the astrology truth in the following.

What are Capricorn Male Traits in Love? 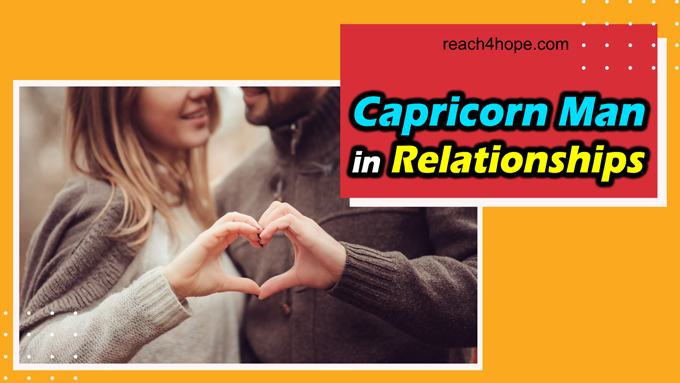 He is truly ‘The Lover’ of the zodiac.

We’re talking about the ambitious man who won’t hesitate to go after what he wants. It takes him a while to fall in love because he needs to make sure his choice is worth his investment. However, once he falls for you, nothing will stand in his way.

This is the guy with plans – he will approach you with some romantic tactics since he can’t dive himself into anything but the best. Though he seems to be a composed, calm person, he is indeed very insecure when it comes to love relationships. Therefore, all his heart yearns the most is comfort and stability.

You shouldn’t force him to display his vulnerability side; as Capricorn man doesn’t open up easily, he prefers taking the intimacy slow.

He may look serious most of the time, but this guy surely likes to have fun in love.

Never say no whenever he asks you out for a date because time is very valuable to him. If he spares his time for you, you’re special to him more than an ordinary friend. Also take chances to engage in intriguing, intellectual conversations so that you can emotionally understand your Capricorn better.

For anyone falling for a Capricorn male, please be patient and consistent before he decides to step out of his shell and reveal his inner feelings to you.

How to Love Your Capricorn Man? 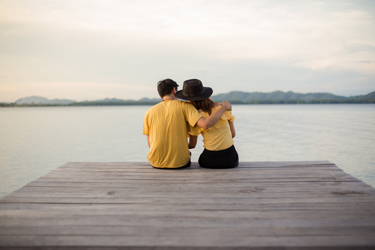 As long as you get insights about Capricorn traits male in love, you’ll have no problems displaying your affections to him.

Read about Cancer male in love signs if you (as a Capricornian) happen to fall in love with that guy.

He may be shy and reserved, but this guy would love if you shower him your love through actions. When dating a Capricorn, feel free to compliment him, touch him, kiss him, and let him know how much you love him.

Show much of your desire for him and he will show his eagerness for you in return.

Rather than words, the guy with Capricorn zodiac sign really needs physical affections to recognize he is needed and loved.

Here are some prominent qualities of a Capricorn man in love:

1. He is extremely serious

Your man never takes anything lighthearted.

Capricorn has a reputation for being trustworthy and reliable. Undoubtedly, he holds very high standards for not only others but also himself. No matter whichever relationship or situation he is in, he can be pretty hard on his own self.

Don’t get upset or frustrated with his bad moods – well, it’s just that he can’t accept the fact of being failed. Even in a relationship, he will try his best to do things right in the first time.

2. He loves being appreciated

Just like Sagittarius man in love, the Capricorn guy is always known for his level-headed personality in most situations. Regardless how stressful the circumstance is, he will hardly get freaked out or panic. Because of this, people often see him as a pragmatic individual.

Despite his cold exterior, he would appreciate a lot if you tell him how much you admire his sensibility. Take your time to sincerely flatter his practicality and you two can go together for a long way.

Capricorn man is smart but sometimes can go overboard.

You might find it cute at first; however, the way he keeps acting like he knows everything will soon annoy you. If you truly have feelings for him, then you can help him fix it through conversations. Don’t try to pretend like you won’t get bothered by this traits; instead, he will accept openly if you tell him the truth.

4. He is very responsible

Consider yourself lucky if you’re current with a Capricorn – he is a responsible partner and never minds taking all the responsibility in the relationship.

When falling in love, he is likely easygoing and seen as a great man to get involved with romantically. Of all good qualities, the reason making him the best choice for most women is his responsible attitude. You can always count on him when it comes to making wise decisions whether you are the practical type of gal or simply a free spirit.

With his analyzing nature, Capricorn man will always have your back.

5. He values family the most

To this family-oriented guy, his family is certainly significant.

Even though he needs quite a long time to commit his love, he loves hard and his love for family is the greatest. Don’t be too surprised or make a shock face when he wants you to meet his parents immediately. The moment he talks about this matter, you can tell that he’s serious with your relationship.

Taking you to his parents’ house is a sign he is ready for a commitment.

No matter how much he loves you, his love for his big family is incomparable. You can guarantee he will do everything to protect his own family in the future.

Believe it or not, ambition is the middle name of every Capricorn man.

If you’re asked to describe a Capricorn, please remember that he thrives for a prosperous life. If possible, he will have a way to reach for the stars. Put it simply, this guy holds a very big ambition that sometimes makes people around him unable to keep up with.

As his significant half, the best thing to do in this case is to show your support for his goals. Don’t quickly shut down what he is saying to you; instead, listen to his advice attentively because he knows exactly what he is talking about.

7. He has intense personalities

The Capricorn male seems to always be in a love-hate relationship with everyone or everything he encounters with.

His intense personalities will definitely bring you frustration – he can be passionate about one thing now but will soon lose his interest, for instance. For those who’re in the first stage of getting to know a Capricorn, this trait can be very unnerving. However, just don’t quickly give up or give in.

The key is your patience!

This sometimes is also confusing whenever you plan to prepare a b-day present for him because no one can be certain about his preference, even himself.

Along with Taurus in love personality traits, Capricorn is also one of the most down-to-earth signs.

You’re having a crush on a very laid-back guy. He is not really picky when it’s about choosing a partner and can be adaptable to any personality. He can have a fun time dating with someone as composed as him but also has no problem with high-maintenance people.

This of course makes the Capricorn male the most relatable and loveable partner.

9. He has pride for his self-control

With a serious guy like Capricorn, he surely knows when it’s the right time to have fun and when things should be taken thoughtfully. It’s great to have self-control; nevertheless, his is on another level.

Because he is so responsible and controlling, you hardly find him participating in any guilty pleasure. Before doing anything, he usually comes up with a careful plan and tends to over analyze everything which end up causing intensity.

Never expect him to let it go once!

10. He is not good at handling heartbreak

Keep in mind that your Capricorn man takes heartbreak seriously.

Though he acts as nothing can affect him, an argument or a breakup indeed can hit him hard more than expectation. He will immediately shut down once getting upset. Don’t try to communicate with him at that time or he may hurt you with his words.

Once the madness eats him up, this guy can’t help but saying things he is likely to regret later. Get ready to deal with this issue if you’re in a relationship with him.

Dating and loving a Capricorn man is not really complicated as long as you understand his personality traits and nature. In shortly, he is a down-to-earth person and only wants to live a simple life.

He is mostly accused of being too ambitious and how he focuses too much on gaining a prosperous life. Well, that is true but it’s only half the story. The truth is that he’s also a reliable, protective partner who guarantees to provide you a future with security and durability.

Hope you will have a wonderful time with Capricorn man in relationships!