Being used by the person whom you really love is suck!

Chances are all of you probably have suffered from this situation at least once before, so it’s better to find out now rather than keeping yourself sinking.

Your Scorpio man is charismatic and has a magnetic personality. However, there are times he makes you wonder whether he truly loves you or he simply takes you for granted.

If your doubt is true, then what signs Scorpio man using you?

The feelings of being used or led on are hurt and embarrassed; probably he is wasting his time with you until figuring out how to win the heart of his true love.

Here’s how to know your Scorpio man is just using you!

When a Scorpio Male Hurts You Purposely… 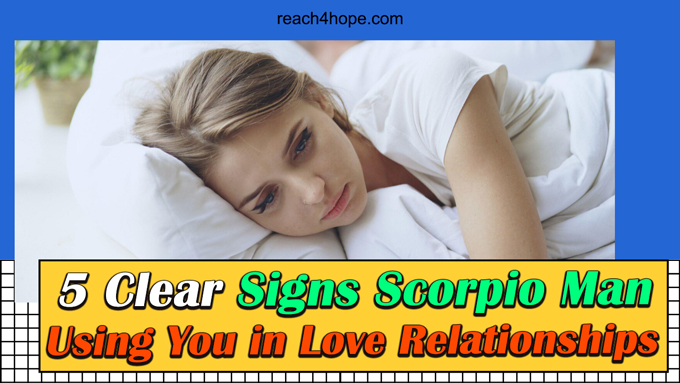 #1: He doesn’t want to meet people close to you

Specifically, he turns down immediately the idea of meeting your friends or visiting your family. When a Scorpio man has no sincere feelings for you, he won’t agree to go out with you due to the fact he might be seen somewhere.

Like Cancer man, a Scorpio shows no interest in getting to know your friends or your family.

If you invite him over your parents’ house or tell him beforehand that you want him and your friends have a date together, this guy will come up with dozens of excuses about why he shouldn’t go or that he is not ready. The truth is: he will never want to go no matter how many months pass by.

When the Scorpio male does not take your friends or your parents important, it means he doesn’t want to invest in you as well as form a future with you.

Have a look at signs a Scorpio man falling for you here!

#2: He refuses to hang out with you

A sign telling a Scorpio man has no feelings for you is that he doesn’t want to go anywhere in public with you. He doesn’t want anybody to see you and him hanging out together; that explains why he refuses your offer of visiting your friends and family.

This guy also won’t take you out to meet his buddies; whenever you ask him the reason, he would claim that he just wants you to himself. The truth is: his behavior means he is messing around with you and has no intention in introducing you to other people.

Of course you can’t help but thinking of yourself as his dirty little secret.

You’re theoretically his girlfriend but why he has to keep under wraps? This is an obvious indicator letting you know he doesn’t see you as his true lover; instead, you’re no more than a friend with benefits.

#3: He talks about sex frequently

Are you in the initial stage of dating a Scorpio guy?

If so, you should notice the way he talks when you two have conversations. In case he just wants you as a sex partner, all of his topics simply revolve around asking for dirty pictures, trying to sex up his story, and tempting you sensually.

The typical Scorpio male if taking things serious with someone, he will save the sexy talk for the very end…not before the love bond is formed.

You can tell he is using you when all he wants to talk with you is about sex.

This man is usually prudish next to the woman he likes. Rather than diving into bed right away, he would prefer to hold off on the sex until he’s sure that the relationship has hope and potential. Otherwise, he only comes to you for a booty call or a one night stand, nothing more.

Discover the meaning when a Scorpio man touches you!

Known for being mysterious and private, a guy with Scorpio zodiac sign doesn’t open up easily with anyone. Lacking security, it takes him a very long time to feel completely safe and comfortable in a relationship. The moment he trusts a woman, he will put down his guards and let her in.

In case you are dating a Scorpio man and having quite lots of conversations with him but it seems like he doesn’t want to mention about his personal stuff, then it’s a sign he is either not ready or not into you.

If he just sees you as a sex partner, you will never get to him on an in-depth personal level because he feels unnecessary to tell. He shows no care or trust; hence, there’s no reason to stay…it’s better to move on.

The talk between you and the man using you is basic and sexual without including any emotional content.

Scorpio man will be attentive if he’s truly love you…let’s figure out things he wants to hear in a relationship.

#5: He disappears out of the blue

Well, it’s understandable if your Scorpio man has busy schedules and only shows up at the last minute. Nonetheless, a guy who likes you truly will never disappear or cancel his plans with you constantly.

Disappearing on you is a sign he doesn’t respect you as well as value the time you two spending together. When he keeps canceling or rescheduling the dates, he wants you to know that you’re not his priority.

Another example of Scorpio man playing his disappearing acts is when he doesn’t reply your text messages or call you back immediately. Is he always busy? Doesn’t he have a couple of minutes to talk to you? If he continues giving excuses and avoiding you, then it’s time to rescue yourself from this relationship.

In general, signs Scorpio man using you in this article help you determine his true feelings towards you so that you can decide to whether keep staying with him or leave for good.

When this guy plays around with you, he expects you to always be next to him and listen to his story without asking. If you don’t react like the way he wants, he will directly snap back at you. Shortly, a Scorpio sees you as his personal punching bag which he often uses to throw out his tantrum.

For more information about the Scorpio male, leave your comment below.