Taurus Man Ignoring Me… (With 4 Main Reasons Behind)

Home » Astrology » Taurus Man Ignoring Me… (With 4 Main Reasons Behind)

Has the man you’re dating suddenly stopped responding? Did he give you the cold shoulder out of the blue? Or does it take him longer time recently to reply your text?

When it comes to Taurus man ignoring me, there’s no obvious reason.

Being ignored is a very frustrating feeling, especially if the person doing this to you is the one you’re dating. Why would he act withdrawn around you? For those who are stuck at wondering, this article can help you.

Sometimes his silent treatment doesn’t mean his interest in you no longer exists; in fact, he just need his alone time to digest loads of thoughts.

Read the info below and find out why he is doing this and what it indicates.

Why Would a Taurus Man Ignore You? 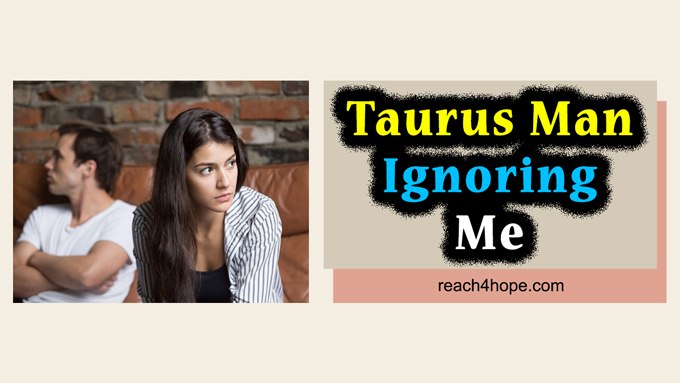 If you’re in a relationship with a Taurus man, then you must know that he tends to express his disappointment or hurt by ignoring you. No explanation, he will shut down until you feel guilty or understand what you’ve done.

In short, his silent treatment is a punishment.

Perhaps you did something that upsets him without realizing it. Or, he may lose his interest and does not want to waste more of his time with you.

Rather than shouting at you or expressing his feelings when he’s hurt or mad, Taurus man prefers waiting and staying silent while thinking through about everything. Don’t push his limit or you will witness his wrath (cutting you off completely).

There are times your Taurus partner acts completely distant; in fact, he is just busy and has no time to contact you. Keep in mind that he takes his career very serious and ambiguous – the Bull strives for a prosperous life.

If you’re the type of woman looking for constant attention from the boyfriend, then you may get disappointed with a Taurus male.

Depending on the load of his work, he will be back to his normal state when he feels he can. Don’t overly criticize his behavior or he will assume it as clingy behavior – that’s surely a big turn off for him.

Approach him with a great concern or he may snap at you!

Make sure he’s truly busy before accusing he withdraws you. It’s better to give him space instead of bombarding him with texts and calls.

3. He may wait for your chase

Believe it or not, there’s a chance Taurus man is falling in love with you when he pulls away from you. Rather than making the first move, this guy wants you to take initiative or literally chase him.

There’s no way he pursues you the moment he knows you like him. For a Taurus, it’s you that must chase him down. If he ignores you this case, then he will soon give you other signs so that you can be determined with your action.

Read his body language to tell the difference between him ignoring you because he likes you or because he feels upset.

The Taurus male also tests your loyalty by not replying your messages or not calling your back. His purpose is to see whether or not you’re willing to initiate contact or initiate the romance with him.

He doesn’t want anyone to mess up with his heart.

4. He may constantly change his mind

If you find yourself get close to a Taurus man in a very short time, then tell yourself this is not his normal behavior. He is a laid-back person who falls in love very slowly – once he realizes he is in a fast-paced relationship, he will freak out and figure out ways to pull back immediately.

Much worse, he probably blames you for that.

Usually taking much time for a commitment, he will give you the cold shoulder or not talk a word to you. Don’t force him to love you or he will cut you off instantly and move on. This guy usually asks for a lot of time to clear his head and think about the future relationship – he will consider to see if you fit in his criteria or not.

This case is not all your fault; at some point, he will realize his fault and offer an apology.

How to Get a Taurus Male Not Ignoring You?

Don’t be sad or get emotional, firstly!

When talking about this tough guy, Taurus is indeed quiet and reserved. Once he has a crush on you, you may feel it despite his cold exterior. Not really ignoring you, sometimes he’s just quiet so never get freaked out quickly.

You shouldn’t play mind games to handle a Taurus man because all he needs in a relationship is the consistency.

The next thing you should stick in your head is that he is extremely stubborn and has a nasty temper. He won’t be upset easily; however, you can’t calm him down once his wrath is brought on the surface. If you did something hurting him, then apologize and show your sincerity.

Last but not least, it’s necessary to provide him enough security.

Try to show him affections like telling him when you got a crush on him, complimenting him, showering him with gifts and attention. As soon as he understands your heart, he will fill it with love in return.

What if your Taurus man still ignores you?

Simply give him private time and space to reload his mind and think about what happened in his life. He may need his alone time to unleash his anger because he doesn’t want to expose it in front of you.

Always be ready to take the action and prove to him you’re sorry for the mistake and make sure it will never occur again.

That’s all about Taurus man ignoring me!

You shouldn’t push this stubborn guy to hard or intense. By knowing his little secrets, you will get to know him better and stop all the guessing. For more facts about his complicated mind, leave your comments below.