Born between April 20 and May 20, Taurus guys are the ideal type of women; however, attracting them is not easy.

The Taurus man is practical, down to earth, and laid-back. He is not the one spontaneous in making decisions; actually he is more slow-paced. His stubbornness is the only thing that no one can really pin down.

He is very consistent in love.

When falling for someone, he is thoughtful and tends to wear his heart on sleeves. If a relationship worth his investment, then he will make an effort; otherwise, he will never waste his time.

So, how does a Taurus man act when in love?

Of course this guy won’t quickly admit his feelings because he doesn’t believe in ‘love at first sight’. It takes him quite a long time to find the security he needs in a romance.

5 Obvious Signs a Taurus Man is Falling in Love… 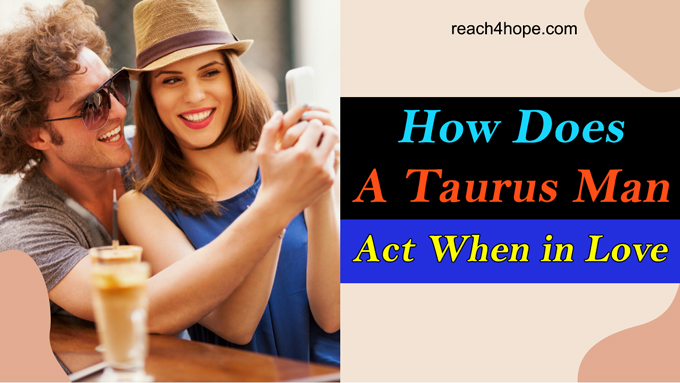 #1: He is shy and standoffish

When the Taurus male likes you more than a friend, he doesn’t make the approach immediately. He must be sure if you feel the same way towards him; thus, he may seem a bit shy and standoffish at first.

Don’t consume his shyness as one of signs he’s not interested; until he is certain about you, he then will make a move.

Rather than waiting and doing nothing, you must show him several signs letting him know you also feel about him in the same way. Rather than ignoring you, he would be more comfortable to reveal his feelings if you take the initiative telling him that you love him.

Learn about Capricorn man in love relationships if Taurus people are growing interest in that guy.

#2: He spends more than with you

Like the straightforward Gemini when expressing love, Taurus man can’t help hiding his affection for his loved one. If he falls in love, he will take all chances just to be around the person he loves.

You’ll realize that this guy spends more time with you as he enjoys being surrounded by the love he feels, especially if you can boost his confidence and give him uncontrollable support. Be a partner he can count on! See tips to make Taurus man miss you when you’re not around him!

Does he ask you to hang out with him frequently?

If so, then he is developing feelings for you!

#3: He puts more effort to communicate

We all know that Taurus man is not a smooth talker – this is one reason that he can get along well with Scorpio: neither of them can make incredible talks, and both understand this flaw of each other.

However, love needs effort; when the Taurus male truly has feelings for someone, he will try his best to communicate with that person. If he falls for you, he will want to learn more about you and also expect you to get to know him better.

#4: He includes you on financial decisions

This guy is private and tends to keep personal matters to himself. When it comes to making decisions, he makes with a very controlled and focused manner. Others may see him as a stubborn or rude person, but he’s just responsible.

He never wants to include anyone on any decision he is making.

Nonetheless, things change when he is in love. He will begin discussing financial decisions with you as well as include you in many other aspects of his life. You may think this sign is not obvious – believe me, this is a huge deal to the materialistic Taurus.

#5: He shows his jealous side

As mentioned earlier, Taurus man seems to be shy and standoffish in first meetings. You don’t even think that he has feelings for you because he doesn’t show any effort in the beginning. He definitely does not want to take risk initially!

But, when this guy grows deep connection to you, he has tendency to get jealous. He won’t mind letting others know that you’re his. If seeing you talk to someone else, he will immediately put himself out there to make sure that person understands the situation.

His jealousy or possessiveness is a sign telling he loves you.

See also best match for a Taurus in love…

Now you already know the truth about how Taurus man acts in love, right?

He might be laid-back and slow at first, but will be very romantic and consistent once falling in love with the person he is interested with.

If you want to stay forever with this guy, then make sure you are loyal, natural, and strong. Just be your true self, like being determined in what you want. He expects his partner to be a bit feminine but also sophisticated at the same time.

Don’t push a Taurus as he is not a risk taker and takes everything slow.

In love relationships, he’s probably not the one making the first move!