What are the signs a Cancer man is serious about you?

It’s not hard to tell though.

If you want to know signs this guy has feelings for you or wants to be with you, the simplest way is to observe what he does and what he says to you. Known for his mood swings, he needs time to open up completely.

In case he is really serious about you, he will love you hard and dedicate everything just to make you happy. The Cancer male can’t help but falling in love fast. As he is afraid of getting hurt, he already tried to refrain himself but can’t.

Keep reading to learn more about this faithful man in love.

How to Know You Cancer Man is Serious in a Relationship? 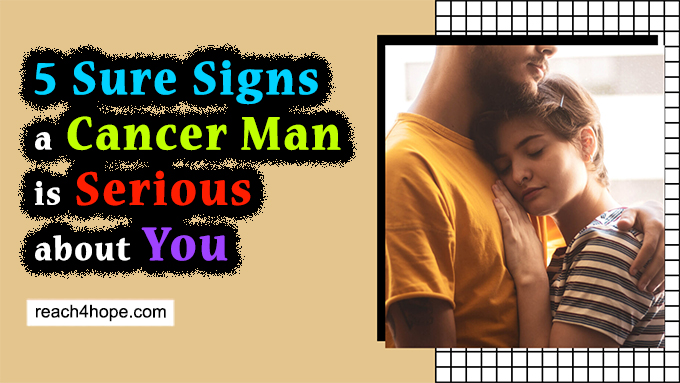 You may get confused and frustrated at first because this guy tends to give mixed signals initially. He doesn’t want to open up his feelings too soon. Give him time and he will come into your life at the right moment.

As a family-oriented person, no wonder Cancer man is good at cooking. The thing is that he won’t cook or show his skills to anyone. If you find your Cancer boyfriend suggests cooking for you, it’s a sign he takes you seriously.

Cooking is one of his great assets and he totally knows that. If he doesn’t want to cook, it’s not because he’s shy. In fact, he doesn’t need to waste much energy in entertaining someone who is not special to him. Appreciate when he invites you over and cooks a whole meal for you.

This honor can’t be taken lightly.

Cancer man feels most comfortable when he’s at home and in the kitchen. If he invites you to his house and spends time cooking with you, tell yourself that you’re probably his priority.

2. He invites you to his house

Like I just said, home and family are things extremely significant to him. They hold a special connection on the emotional level making him want to value at all cost. When he invites you over, don’t think that it’s just a normal invitation. He is indeed serious about you and he wants to let you enter his safe place.

He spending precious time with you at his home is a sign he trusts you and considers a committed relationship with you.

When you’re allowed to step into his comfort zone, tell yourself that you’ve earned his trust and reliability. Behave comfortably and show respect to his sanctuary. This is a common way a Cancer man often uses to test the water in case you want to take the love affair with you on a higher level.

Read more about signs Cancer man is playing you here.

Or, we can say that he wants to live with you.

You two may just start the relationship for several months. But, it’s easy to know if a Cancer man is really serious about you. It’s completely a sure sign if he suggests that both should stay together. Plus, he also shares his thoughts about the future in which you are there and the two of you will share a home.

Of course this guy won’t be so bold at first. Rather than asking you directly, he will play it safe by bringing up the idea in hypothetical terms. For instance, he will use ‘someday’ when he actually means that he wants you to move in ‘next month’. Before that, you may find him randomly mention about what kind of home you like or something similar.

If one day he shows you real estate flyers, then be ready because this Cancer man is planning his future for the relationship with you.

4. He talks about marriage

When you two finally move in together, the next step proving Cancer man is serious about you is discussing about marriage. As a man of the family, his goal is to settle down with the right person. He will take time observing you to make sure if you’re really on the same page about committing to him.

He wants to marry the one he loves and will be clear about this to avoid getting hurt.

How long does it take a Cancerian to fall in love with someone?

Not as long as you think; in fact, he may fall for you right at the first sight or after a week, especially if you two share same life goals. He loves fast and quickly thinks about a settled life with the person he’s just met. This sometimes ends up with Cancer man heartbroken because they may not have the mutual feelings.

When talking about marriage, it means that he already planned spending the rest of his life with you. Many wonder why the Cancer male falls deeply in love; well, the answer is because he puts the woman he loves the first place in his mind.

5. He wants to have kids with you

Did he talk about having kids?

You know he is serious when he mentions about having kids with you. As I always say, he is a family man who dreams about creating a family of his own with the woman he loves.

Don’t be surprised when hearing him blurting out something like he wants you to be the mother of his children, even though you two just hang out or date several times. This guy is probably testing the water to see if you want to be a part of his family.

No need to doubt it!

If the male Cancerian talks about kids, he thinks about your presence in his future. He will never mention if he’s not serious because the last thing he wants in a love relationship is giving you the wrong idea.

If combining all the ideas above and ending up with him introducing you to his family, it will be the end game. These are signs a Cancer man is serious about you, in case you’re doubting his feelings for you.

He may be shy and refrain his feelings for you at first, you can easily figure out his seriousness by noticing what he does and what he says to you.

Keep in mind that this guy won’t waste his time if he’s not serious about you.